"Ever since the eclipse of our native cultures, the dominant American view has been that we should cultivate the self rather than the community; that we should look to the individual as the source of hope and the center of value, while expecting hindrance and harm from society. We have understood freedom for the most part negatively rather than positively, as release from constraints rather than as a condition for making a decent life in common......We have a Bill of Rights, which protects each of us from a bullying society, but no Bill of Responsibilities, which would oblige us to answer the needs of others."                                from The Web of Life by Scott Russell Sanders 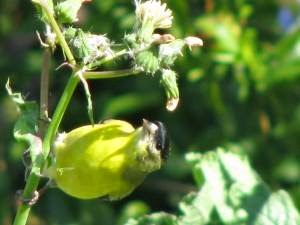 Just as I was about to pull up these weeds in my school berry patch this little guy landed. He made me ponder the quote above.  It was part of a Northwest Institute Course I have been taking with 6 other stalwart people on Wednesdays  nights at church.  The course, called Discovering a Sense of Place, has helped me understand a bit more about my relationship to Middle Tennessee.  It caused me to pause.  Should I pull the thistle up because it is my right to have a beautifully manicured garden or should I leave it for my beautiful Goldfinch friends as one of their primary food sources?  I know what my native American friends would have done.  They left most of the natural world as they found it.


This thistle is a natural source of food, unlike the meal worms I provide when we fledge bluebirds.  We diligently try to assist them in their attempts to survive pitted as they are against the invasive house sparrows brought to this country by immigrants 300 years ago.   How ironic.  Do I pull out a natural food source and then go buy niger seed for the finches?  You tell me


Posted by LibraryTeacher at 8:57 PM No comments: