Wonder, Eccentricity and the Library 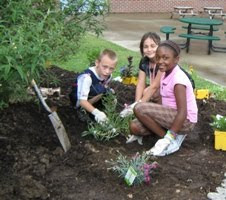 When most people think of librarians they think of stacks of books, people who walk about speaking in hushed tones smelling faintly of moth balls, wearing reading glasses, with pencils stuck in their mousy buns. That image and my experience with librarians who valued order over people was why it took me a long time to finally admit that I was a librarian! Still, after all these years, people are confused about what a librarian is. If you visited my school yesterday, you might have asked what on earth is a librarian doing with children in the middle of a garden?

Upon my graduation from college my recently discharged husband and I headed for Syracuse New York so that he could begin his education. I soon learned that my history degree prepared me for very little in the real world, and quickly settled into a job at Syracuse University Library. Librarians there added a new dimension to my existing stereotype. I'll call it the ECCENTRICITY Factor. I was astounded and fascinated by Betty Henes, a great reference librarian. She shared the dubious honor of being the most eccentric person I'd ever met with my high school chemistry teacher, Mr. McGregor. In fact, I often thought that it was a shame they never met, it would have been a marriage made in heaven!

I watched as timid freshmen approached her in need of help with the myriad research sources available for their first projects. She never tired of expressing intense interest and pleasure in each student's tentative questions. She had a unique way of expressing that interest. It involved a cross between a snort and and an Oooooooh (which I can reproduce but have difficulty describing)!

She wore two uniforms for work both were wool A-line jumpers, varied only with blouse or sweater color. As a recent graduate, I viewed her, how shall I say, as strange until I recognized that this unique individual (who I later learned had a Phi Beta Kappa key) could find more information in less time than I had imagined possible! She was only a beginning to the Eccentricity Factor -- there many others! Ms Mullins was the Government Documents Librarian. Anyone who has tried to navigate the vast number and variety of government publications knows that it is nothing short of labyrinthine. I could always find Ms. Mullins by trailing her scent. She had dyed jet-black hair, highly coiffed in a style popular 15 years earlier, and was always dressed to the nines. She kept a bottle of her favorite expensive Cologne in the right hand drawer of her desk and used it liberally!

All these varieties of eccentricity shared one thing in common; they all loved to learn, were highly curious, and cared about helping people find those things that helped them along their journey in life!

Later I found myself drawn to Public Librarianship just after the birth of our daughter. I began working part time in the Libraries of San Bernardino County as a substitute librarian. Again, I met librarians who exuded eccentricity. Ms. Brown, the librarian at the Apple Valley branch lived far out in the desert where she had built her own home brick-by-brick, pipe-by-pipe. She had worked in Hollywood on the quiz shows in the days when she sat hidden beneath part of the set with her reference books checking answers as they came! Author Hardy Gramatky was a friend and frequented her library in his sunset years! This eccentric librarian shared that same love of learning and finding things with the eccentric but dedicated crew at S.U.


Today as I took the garden helpers into the garden --- and saw the glee and excitement of those 10 children who paid their dragon dollars to go to the garden instead of getting jicky-junk-- I wondered in my heart --- will these students recall me as that eccentric librarian in their life? As I think of it --- I am pretty eccentric because I get this basic fact --- when we encourage curiosity and real life experience --- we all learn so much -- I know, you are asking, "What in the world does a garden have to do with a school library?" That is a valid question, and here is the answer. Just like Betty Henes, I delight in the budding curiosity of my fellow travelers to the grave. (a literary illusion to one of my favorite author's Dickens) Though it is not in my job description it is necessary to prime the pump by encouraging curiosity --- questioning is the first step in the process of INFORMATION LITERACY! There it is the big Librarianship word!! Before you can do research you must have a question for which you seek an answer!

As those children pulled up the last of the carrots --- they began to compare the carrot they pulled to their neighbors carrot...they were measuring them --- Then we found caterpillars which we looked at with magnifying glasses... we planted vines that we'd started in paper cups three weeks ago! We investigated how the vines had woven their little tendrils around the blind pulls next to the window where they had been growing in the library. We gently unwound them so we could take them out to the garden. Little fingers quivered with excitement as they tried to be gentle and in a hurry all at the same time. As we planted the vines --- One of the students pointed to the bottom of the paper cup. It was disintegrating. She wondered why!?

We smelled the herbs, we picked tomatoes ---all this was generated by the kids -- not me...We were finally driven to return to the library by falling rain. The children came in wet --- covered with weed seeds --- still chattering with excitement. I, on the other hand, came in deeply content. At least for this one day --- an eccentric librarian shared with children who shrieked with delight -- the joys of curiosity sparked by something that was real --- and watched in wonder as they strengthened that remarkable muscle that makes us human; the Brain!!!!
Posted by LibraryTeacher at 10:08 PM No comments: