I didn't know grown-ups did that 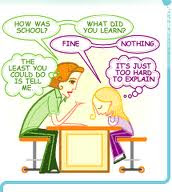 At dismissal I stand at the door making sure children don't leave the building before their parents cars pull up to a full stop. We use a park bench to hold one of the doors open as the cars move in a rhythm established by teachers who direct their movement in a ballet that lets us load cars with children in just 15 minutes.

As the time stretches on I sit on that "doorstop." Since I injured my back, I find it difficult to just stand for long periods and especially on a day like today the bench beckons! The sky is that remarkable shade between cerulean and cobalt with puffs of white and dancing yellow leaves dotting it. When I first began sitting on that bench at the beginning of the year, I noticed how sitting results in more frequent personal interaction. Something about being at the same height as the children inspires them to come up and hug me, and share little secrets as they stand in line waiting for the cars to stop.

A quirky little girl stopped to tell me she was having a problem last week. She had come up early, not waiting to hear her name spoken, so that she would be invited to sit and chat. Usually I send them back if they are breaking the rules and coming before they are called, but something in her demeanor made me invite her to sit next to me. As I listened, I thought there might be more to her story than could be resolved by short visits at the bench. It might be helpful for her to talk to our school counselor, a beautiful black woman who inspires trust.

Trying to think of a way to invite such a conversation without stating outright that she needed to talk to a counselor, I told her that after all the cars have gone Lee, who calls the childrens' names as the cars form into two lines, often comes and sits next to me. "Sometimes I pour my heart out to her about things that might be troubling me." I said. " You know sometimes we just need someone we think is wise to listen to us , and they will help us sort things out."

" I didn't think grown-ups did that." She looked shocked. "Oh, honey. I remember when I was your age, I thought grown-ups were finished, too. I looked forward to being finished someday, myself. But what I have found is that I am always learning and changing and growing, I still make mistakes in working with people and have to ask for forgiveness. Even now, that I am 60 years old I am still growing, learning and changing."

Her eyes grew bigger, "You're 60?!" she said incredulous. "I thought you were 40." Just then her car pulled to a stop and she had to leave before we explored the issue of my advanced years! For this nine year old, I was as old as Methuselah! She left with lots to ponder....and I got up from the bench feeling very ancient indeed! I found myself hoping that the people in that car line had access to a great article from PBS about how to talk with you kids about school. http://www.pbs.org/parents/goingtoschool/talk_child.html
Posted by LibraryTeacher at 11:22 PM No comments:

The World is sort of FLAT & Cuba is next to Africa

4th graders had just arrived to do "research." They each had an explorer. I had created WebPages at various reading levels (3 & 4) that answered all the questions their teacher had given them. I wanted to insure their success and believed the WebPages would make their reading easier. Each page had two graphics - a portrait of the explorer and a map showing their explorations.

Admittedly, the questions they were seeking answers for were not interesting. They were things like --birth and death dates, the dates of their explorations, and locate two interesting facts. They were then to draw the explorers routes on a blank map provided by the teacher. The purpose of this was to learn material that will be covered on the TCAP tests, and to practice map skills.

Here are the results that four 4th graders came up with from my Cabot page.
http://www.westmeade.net/Library/EuropeanExplorers/Cabot.html

2. Cabot got 10 pounds of fish for his explorations from the King of England.

It made me aware, once again, what we understand is proscribed by experience.

The first child either read so poorly that she never saw that the ships sank on his 2nd expedition and he and his crew were never heard from again, or she apparently didn't realize that the article moved on to talk about John Cabot's son and his accomplishments.

The second child made a completely logical leap --- Cabot found an abundance of fish in the harbors of Newfoundland and the King rewarded him for his exploration with 10 pounds of fish. He had no idea that he knew so little that his assumptions would be completely false.

The third child had no ability to articulate in the specific what Cabot explored.

Adding to the problems of some of the children was the fact that the map they were using to draw the routes didn't have any of the Caribbean islands on it. This is a big problem for those who had Columbus or deSoto. I quickly penciled in Cuba.

When I returned to check on this group-- I found that one of the children had drawn deSoto's route from Madagascar to Florida. Even after a discussion of the fact that Florida was not in Africa the student still maintained that Madagascar was the only thing that look like Cuba on the map.....sigh......

Our little friends need much more exposure and much less testing for specific skills and facts over which we will judge their learning and judge the effectiveness of the teachers who teach them!

Posted by LibraryTeacher at 9:55 AM No comments: