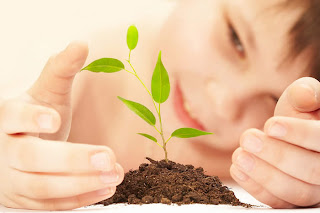 In order to understand why a library would sponsor a school garden, you must have some idea about why school libraries exist.

We support the curriculum, and helping kids become independent readers, but far more than that we support the ultimate goal of formal education; to create life-long learners who are curious and able to develop answers to their own curiosity! Since much of what happens in the classroom is based on the outcome of passing the tests school libraries can stand in the breech!

I wish you could experience the moments of unbridled, undirected, curiosity and growth that happen in our school garden! Because we have too many kids for one session a week, we divide into two groups. One is for 3rd and 4th graders and one for kindergarten through 2nd grade. It has been such a busy week I didn't have time to dream up any formal ideas of what we would do. Since the second group of helpers has a parent volunteer it is helpful to have a good plan in place, but this week would be informal.

Sometimes there is great value to learning on the fly. Let me explain. When I don't have a goal of what I want to cover -- the children create their own lesson plan! As students filtered in with their garden helper passes, both groups were excited by how much (6 inches in a week) the paperwhites and amaryllis bulbs had grown. Then I directed their attention to the windowsill of experiments they created several weeks earlier. I realized that the soil we planted in (taken from our butterfly garden and hard as rock because it is primarily clay!) was far too hard for these tender indoor plants which we had rooted from cuttings to thrive.

I could hear opportunity knocking! I quickly put out soil samples ( one from the butterfly garden, one from the peat of the pots in which we had planted the bulbs and one with soil mixed with compost, sand, earth, and perlite). We compared these by touch, smell, and by looking at the plants we had planted in each kind of medium --- We planted our cuttings in plastic cups so the kids can see the roots and even the act of adding water to these --- brings excitement as the kids see how the water drains down through the soil changing the soil's color as it goes!

We had experimented with my old hoya and cut off a section of it --- one part we had stuck into water and one we had just laid on top of the soil in another pot --- When we dug that one out --- we could see how the plant had put roots into the ground wherever it touched the earth! One of the little girls said, "that is really creepy" To which I replied --- "yes it is --- that is why vines are sometimes called creepers! They creep along the earth and start new plants wherever they touch!" "No she said, I mean it is creepy like monsters!" I guess she was thinking about how weird it is --- maybe thinking about people lying on the ground and starting new people or something!

You never be certain what they are thinking because you never know what their experiences have been! We potted the plants which had now established root systems-- and they left thrilled after having a science lesson which they had actually paid for with their hard earned 'dragon dollars'! A lesson they will probably remember and relate to the science kit that comes in 3rd grade -- that has them planting seeds and watching them grow through the entire cycle from seed to seed.

The second group of 3rd and 4th graders came on Friday --- Denise walked through the garden with them looking at the plants after the deep freeze of the past week --- miraculously the peas are still alive though the kids observed that the tops had some clear frost damage. The plants that appeared to have done best --- were the herbs --- we will be exploring another question --- what makes these herbs withstand the cold better --- these questions which seem so obvious to us --- are real mysteries to them. I do not want to explain and teach too much as I want them to question productively --- I must keep quiet and let them struggle. I want them to develop skills to observe and draw their own conclusions which they must then develop experiments to confirm or debunk. Next week we will make notes about the differences between the peas and the herbs, to see what they actually do see.

We will begin keeping our gardening journals --- But even that will require some thought for them to see why they need to keep a journal --- otherwise it would seem too much like school. If we don't write our observations down -- we can't possibly remember them when we need to refer to them we won't have the information we need to help us make decisions! I'm wondering if I can sell the idea to them. We will store the journals for now in between each visit in the library -- we will write in the journal when they come back in to observe what changes they see in what they have planted.

Their ability to reason is limited by their limited experience! For example -- we cut the sweet potatoes and watched as droplets of water formed on the surface of the potatoes -- we compared and contrasted them to the white potatoes we eat --- The kids came up with the fact that potatoes have sugar in them to make them sweet -- which I thought was pretty sophisticated reasoning!

But when they stuck toothpicks in the potatoes I realized that sophistication in one area is not necessarily cvarried into another! One third grade boy stuck his three toothpicks all on one side of the potato and when he tried to balance the potato on the clear plastic cup --- his turned over and the cut side went in the water --- that resulted in trying to figure out how he needed to rearrange the toothpicks to keep that from happening -- this was far more difficult I thought it should be -- the hypothesis they developed were mostly wrong! It took about 5 minutes to figure out and I actually had to give away the answer away! I had not thought about turning that into a math lesson with 4 toothpicks -- versus three and dividing into thirds or fourths and the concepts of balance and symmetry! It also generated an opportunity to talk about "curing" drying off the potato before we put it in water -- mold-- rotting---

We discussed leaving the potatoes in the library over the holiday so I could make sure they don't dry out! Then I asked them where they would put the potatoes while we wait for them to develop roots. The unanimous answer was "IN a window" so that it gets lots of light!" But then I threw this out --- "If we were planting these in the ground -- would they be getting any light? LIGHT BULB MOMENT! So we put some of the potatoes in the dark and some in the window to see if it makes a difference --- REAL SCIENCE for REAL KIDS!
Posted by LibraryTeacher at 10:17 AM No comments: