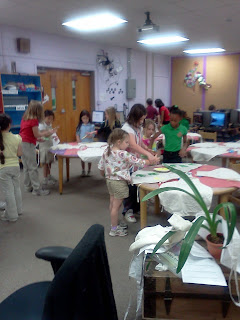 You never know when you make a small contribution to a conversation what can happen! That is how I felt Saturday as adult volunteers put the finishing touches on the 160 aprons for the cafeteria workers in Metro Nashville Public Schools with school gardens.

How did I get into the business of producing aprons? It was the outgrowth of a comment I made at a Nashville School Garden Network meeting. It went something like this, "I don't want our cafeteria ladies to view those of us in the school garden as the enemy. I think sometimes they feel we are saying that they are not doing a good job because the food they serve is not up to the healthiest standards. It isn't their fault. They do all that they can to make our lunches palatable. I think we need to acknowledge them in some way. Everyone needs to know that they are wonderful once-in-a-while."

The next thing I knew I was hand-lettering aprons all last week "Hands Down -- Great Cook"and on Friday -- every kindergartner in the Westmeade came through the library to put their hand prints on those aprons! They hung drying across the computers, over the book shelves and on chairs. The library looked like one of those homes that the wealthy close for the season covering the furniture with sheets!


In the overall scheme of things -- this may not do a lot of good. But hopefully it will warm some hearts as the cafeteria ladies head home for the summer break!
Posted by LibraryTeacher at 9:08 AM No comments: 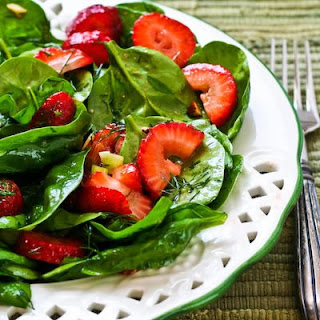 The thought of preparing strawberry spinach-salad for 500 was daunting. Luckily I have people! Martha Stamps, chef extraordinaire, was consulted for a recipe for dressing that young tastes would welcome! Her husband, Shayne of Good food for Good People was able to find a flat of locally grown strawberries. The two of them gave me courage to believe that I could carry it off.

Garden helpers appeared at 12:00 noon the day before excited as usual to go outside in the garden. One of the young charges noticed the rather large knife I was carrying with me.
He recoiled, "That's dangerous." he pointed out. "Yes, it is, but it is the right tool for the job at hand." I said. As this weeks garden helpers strode out among the plants giddy with excitement, they learned some knife safety and proceeded to use the imposing tool to harvest the spinach. This brought me much stress as I reminded them at each moment how to carefully handle a knife. A hundred years ago the children would have probably been able to wield an axe by this age.

These children had no idea of how to handle a knife or use it to free the spinach from its stalk. They also had no idea how to gather the ripe berries. Things I grew up knowing without being taught through the example of my parents or grandparents, theses students had not experienced. They had to be taught to pick the ruby red strawberries and to remove the ripe ones without injuring those which had not yet matured.
They had to be encouraged to eat the fruit straight from the garden..."is it clean?" one asked. "We haven't used fertilizer or pesticides and it has been washed with rain water....do you think it is all right?" The answer was a red berry in a happy mouth!

We picked slightly more than two bushels of spinach -- but I confess we did not succeed in picking many berries, for most of those went into waiting mouths. One of the youngest students announced, "I do not like strawberries, but these are good. "Red-ripe strawberries sweetly warmed in the sun and delightfully juicy yielding to gentle pressure are different from those we buy in the store which have been engineered to be hard enough to ship, red enough to look ripe, but lacking in the real taste of a strawberry.

It was 12:30 before I got to bed last night. I had begun washing and tearing the spinach. I had bravely announced a SALAD DAY for Friday. But upon reflection, it was daunting. That is when your friends come in so handy... On Friday our gifted teacher, who had been displaced came early to help me cut the berries and two of the moms seeing that I could use extra hands stayed on to help toss and serve the salad......Salad for 500? Piece of cake with a little help from your friends!

Here is the recipe for the dressing -- it makes a quart - 2 cups oil, 1 cup red wine vinegar, 3 cloves of garlic chopped fine ( I used a garlic press) 1 teaspoon of salt, pepper to taste, and emulsified in a blender.
Posted by LibraryTeacher at 9:44 AM No comments: