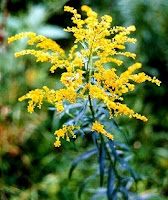 Like goldenrod they come up unbidden
Weeds uninvited in the world

But, someone let them get a start and now,
They grow on stocks that need no tending.
Weeds unbidden, uninvited in the world.
Given elaborate names - constructed from glittering words
Names so spectacular that no one could utter them
They speak strength, beauty and awe.

Such an audacious start
Without nurturing support ­or extravagance of spirit squandered on them they are left to sink roots into such soil as they find.
To make their way in the world.
I wonder ­
Will the world be as kind to Jamyron and Vandasha as it is to the Goldenrod
Growing unbidden, uninvited in the world?
Lavished with sunlight and showers, gentle breezes,
and  just enough space along the roadside to bloom.
And Jamyron?  And Vandasha?
Posted by LibraryTeacher at 10:38 PM No comments:


The new Smithsonian Magazine arrived yesterday and as I sipped my coffee sitting in my re-creation of the natural world nestled in my urban backyard,  I found myself reflecting on the interplay of complexity with our desire for simplicity and dominance in the race to educate.

The article that set me on this course was one relating to the discovery of the higgs boson, sometimes called the 'God particle.'  It begins with a young Albert Einstein sick in bed.  His father brings him a compass and Einstein's thoughts are transformed.  The magnetic field invisibly and without fail moves the needle.  Einstein wonders if the universe might be controlled by elegant invisible forces not unlike magnetism. The article then fast forwards to the story of a young physicist with similar thoughts about a "field" that fills the void between particles much as water fills a fishbowl.  He describes this field with a mathematical formula, but his initial attempt to publish fails because the idea seems, to the refereed journals, preposterous.

As a 7th grader I was part of the guinea pig generation for "new math." It was a valiant attempt to teach math by teaching the principles behind it.  Our first foray into this mystical realm was the binary system.  The rising use of computers no doubt drove that.

It was fun to convert base 10 into binary. Performing ordinary operations in the binary system was frustrating.  It is like trying to read a color word in a box when the word is printed in a different color than the word. It sounds easy enough, but the brain seeing RED written as GREEN hesitates as it fights to read the word and not the color.  Working in another base is a bit like that.  Amazingly, the thoughts brought on by this simple exposure were wondrously deep and have changed my approach to life in a way Mr. Ryder could never have guessed.  These thoughts flooded through my 7th grade imagination....
The point of this rambling is simplicity itself. I was blessed to grow up at the beginning of educational reform and insanity when there was still time for reflection and not everything was carefully monitored.  Today I would never have been in that math class which we would call AP math.  Math was not my forte.  But in those days I was in that class because of my scores on everything else!  Without that class, I might have missed a major life-changing insight!

Today education is focused narrowly driven by 'outcomes.'  We demand that kids learn certain things before they move on to others, without realizing just how NON LINEAR the universe is.  This focus on formulas and facts doesn't provide the possibilities or reflective time students needed to develop their own deeper universal meanings.  We don't allow children the opportunity to give voice to the ineffable beauty that God has surrounded us with.

Our schools are being driven by people who are too inexperienced and too grounded in business culture to hear any of this and our teachers, who fear for their ever more marginalized positions, are not shouting this from the rooftops.   Point me to a rooftop please!

Posted by LibraryTeacher at 9:51 AM No comments:

A Penny More a Pound

We were 50 people nearly half of whom looked like me ---  senior citizens.  One woman marched behind her walker.  We were met at the entrance of Pubix by a security force called in for the occasion which struck me as humorous.  I suggested to my friend  that  she should use her walker to hit one of the security officers over the head .  Were she willing to do that  perhaps we might have gotten some press coverage, but not a single T.V. channel or newspaper covered this protest.

We met at Vine Street Church of Christ.  We were United Methodists, Disciples of Christ, Friends, social activists all.  We listened to Immokalee tomato pickers, we lifted the 34 pound tomato buckets and contemplated spending the entire day on our hands and knees picking for 2 pennies a pound.

We carried our signs and chanted and handed out literature.  Many people just giggled or ignored us. Older people who remembered the upheaval of the 60s had no patience with us.  When did we become a nation of people who can turn our backs so easily on unpleasant truths.  It is time, friends to acknowledge that all people who work need to earn a living with dignity and receive health care....I'll be giving an extra penny a pound when I buy tomatoes at Publix, but I will ask the manager to receive my pennies to remind him/her that many of us are more than willing to pay the increase we ask for the workers --- for fairness to our hard working neighbors in Florida.
Posted by LibraryTeacher at 12:25 AM No comments: