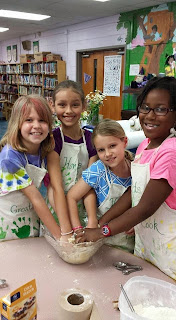 Sara Weeks, author of Pie, inspired four girls to give baking a try in the true tradition of the book.  It is a satisfying story of  Alice whose Aunt Polly leaves her award winning pie crust recipe to her cat and then leaves the cat to Alice!   I admit that the kind of story that Weeks writes is one that I encourage my students to read and take to heart.  It is about shared family ties, friendship and doing what is right. Charmingly written it has a pie recipe at the beginning of each chapter and each turn of phrase tastes good on the tongue. 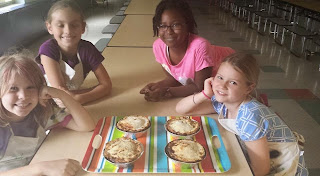 Making things from scratch might not be a familiar experience for most  my friends and soon flour, shortening, butter, and salt to create the crust were everywhere.  Most people today just buy ready made crust or use a mix.  Fortunately, flour is easy to clean up.  After we rolled out the pie crust we started on the filling; peaches canned last summer.  As we were measuring out a cup of sugar one of the girls asked why we weren't using "that sugar" pointing to the sugar packets that were in a basket from the Garden-to-table dinner from the night before.  "Think of how many of the packets we would have to open to make one cup of sugar."  I replied.  "Yeah, but that is better sugar."   I asked her why she thought that and learned that in her world "restaurant" meant good.   Our children have learned to eat processed foods and fast foods and restaurant foods and believe that homemade, homegrown is not as good.


We also had a recipe book that I found in an old bookstore from 1881.  It was great fun to open it up and see if we could follow a recipe that was 130 years old.  When we opened the old binding several recipes and clippings feel out.  These were dated November 17, 1912 and were in themselves instructive, illustrating how different times were.  None of us would build a fire in our stove to make a pie for example, and one of the line drawings in these newspaper clippings were prompted a discussion about racism.  You never know where things will lead when you embark on a journey.  But in the end we had a satisfying experience and on Monday shared a berry pie that I had made and good conversation over what often brings people together -- food and good books.
Posted by LibraryTeacher at 10:01 PM No comments: