An ear for truth, George Washington was the 8th president of the United States? 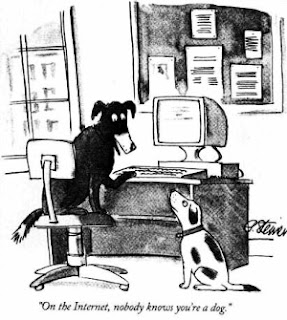 One of the joys of being an elementary librarian is awakening and nurturing the questioning skills that kids need to be good thinkers and good citizens. The  dark side of questioning is answering.  How can students obtain ACCURATE and UNBIASED information in today's technological information silos?

This was the question when  my morning news team presented their Interesting Fact on the last day of school.  Neal  proudly announced that George Washington was not the first President, but rather the 8th. Usually, I see their script the day before broadcast, but in the chaos of the last days, I had not seen it until 5 minutes before air time.

I knew that Neal found this fact on the internet, (that is where all digital natives go) and so we looked together to check for veracity by googling his statement.  I did not believe it to be accurate.  I explained to him that during the time between the revolutionary war and the ratification of the constitution  (March 1, 1781, and April 30, 1789) we had the ARTICLES OF CONFEDERATION which meant that the 13 colonies in most ways operated idependently. I was not sure that the position of "president" even existed.  But cetainly, the leader during this time would have had very limited powers.

As so often is the case, digging into history is complicated and a simple answer does not exist. The google search brought up ten articles which all concurred with Neal.  Beginning with Wikipedia. So we went to air with his "fact."   It was only later when I had time to do MY 'due diligence" that the truth was clear.  This illustrates why teaching about research and sources is crucial!   We need to discuss the value of crowd sourced reserch like Wikipedia (I am a proponent and editor).  But we also need to acknowledge its limitations. Let me describe how I approached this question.

As a librarian I eliminated any of the articles that were ".coms" from initial consideration.  There are perfectly good dot coms but I wanted scholarly, refereed sources as well as the actual document itself.  That left just two of the ten sources to be viewed.  One was the Constitution Society.  Before I read their article I nosed around to see if I could find out if they had a bias.  This usually means checking a statement about who the organization is, its purpose, and goals, and determining where their funding comes from.  This group's self-description included the fact that it educates, and also litigates.  For me, that elliminated them from my initial run through (I already knew that they concurred with Neal) so I moved on.

What propelled me to continue searching something that seemed overwhelmingly correct was the simple question, "Why would all our history books list George Washington, as our first President if this weren't true?"  That is a question I am sure the conspiracy theorists have an arcane answer for.

A really good article from the Department of State outlines some of the debate surrounding the articles themselves.  It turns out that John Hanson, was President of the Continental Congress in 1781.  In this position he was not The President for his powers were so limited he could not even appoint the secretary of state.  At least I knew now where the term "President" had come from.  But I needed more.  Did the people of his time consider him the president of the United States?

The definitive article on this issue came from Digital History, a University of Houston website with valuable primary sourced information and commentary by scholars.  It clearly illustrates the difference between the kind of research real historians engage in and what I was doing.  (They go to  primary sources, discuss among colleagues the opinions they are forming about their meaning, and rigorously vet their information prior to publication).  Here is a part of the article:

"It The Articles of Confederation created a national government composed of a Congress, which had the power to declare war, appoint military officers, sign treaties, make alliances, appoint foreign ambassadors, and manage relations with Indians. All states were represented equally in Congress, and nine of the 13 states had to approve a bill before it became law."

The Articles created an alliance of thirteen independent and sovereign states who agreed to "enter into a firm league of friendship with each other" This sounds more like NATO than the United States!  In fact, in the Articles,  at the beginning of almost all the statements issuing power to do anything come the words, "No State, without the Consent of the united States, in congress assembled..."   So it was not surprising to find that John Hanson held the office known officially as "President of the United States in Congress Assembled" In other words he was the president of the Congress or its presiding oficer.  He had none of the powers we associate with our president.

The University of Houston article continues, "Under the Articles, the states, not Congress, had the power to tax. Congress could raise money only by asking the states for funds, borrowing from foreign governments, or selling western lands. In addition, Congress could not draft soldiers or regulate trade. There was no provision for national courts.  The Articles of Confederation did not include a president. The states feared another George III might threaten their liberties. The new framework of government also barred delegates from serving more than three years in any six year period."

Indeed, going between the original Articles and then reading scholarly analysis helped me understand where all the 10 articles that Neal found went awry.  With today's internet being a place where anyone can publish information and look official, we must be more vigilant. I was confident I had solved the question at hand.  I could say that George Washington was in fact the 1st president of the United States, and that John Hanson held the office  known officially as "President of the United States in Congress Assembled"    I then felt free to explore the internet to see what I could learn.

Googling the phrase "John Hanson president," I discovered one site that confused John Hanson with the African American and asserted that Barack Obama was not the first African American President!Upon googling "John Hanson, first black president" 830,000 articles appeared!  Some of these eve had photographs of John Hanson!  (Photographs only go back to about 1840)  I did not go too deeply into this absurdity --- because it was clearly in the realm of conspiracy theory, but it illustrates again the difficulty in getting good sources for our students.  The idea that whatever we perceive as truth is truth is a dangerous one and we need to help our students learn to ferret out facts while they are young, so that when it is time for them to vote they will have an ear for truth, but as we have an ear for good grammar.

Posted by LibraryTeacher at 9:15 AM No comments:

Commodifying Public Education: How did this happen?


A shout of jubilation went up as teachers heard the announcement that we would not administer the final part of the TN Ready test this year.  I did not join in the celebration. I will not celebrate until we defeat this culture that relentlessly continues the march toward the destruction of public education.

Over the past 30 years I have watched as people use the words, of our founding documents (words that I believe in) to destroy the very things the documents set forth.  We could start with their edited version of the preamble ---they would turn that paragraph into two simple phrases: We the People of the United States in order to insure domestic tranquility and provide for the common defense do ordain and establish this constitution of the United States. In their understanding this is the only purpose for government.   For a history of how this happened read this fine article by a Canadian, Dan Laitsch "Smacked by the invisible hand: the wrong debate, at the wrong time with the wrong people."

While it focuses on education it exposes the subtle way in which words were manipulated by a group with an agenda.  Among the discarded ideals is that which states that everyone benefits from the success and education of all.  The idea which replaces it is that everyone must be accountable and responsible for themselves.  If they fail to get rich or get a good education or have access to healthcare or other services it is their fault because they made bad choices.  TRANSLATE everything that has happened in their lives is their fault.  I'm on board the personal responsibility train!  I spend a lot of my time as an educator helping kids become more responsible.  The problem comes for me when the interpretation is unrelenting and unforgiving.

This "neo-liberal economic philosophy" sees "Government" as an evil that should be limited whenever and wherever possible.  Government regulation is always bad because it decreases PROFIT. What would our world look like without government regulation and oversight?  Wealthy people whose money works to increase their wealth would fare well.  They would have access to everything they need in their gated communities.

For the rest of us, who "labor" for a salary or an hourly wage - not so much. HERE IS WHAT WE WOULD HAVE

Food industry --- FOR PROFIT means --  no control over what is in the can you buy including pesticides and contaminants such as the little snake head in a recently opened can of green beans.
Healthcare industry FOR PROFIT means -- continuing HMO-type care where you have less contact with a personal physician (who is limited to 15 minutes with you) and you are just a cog, a part, in a profit oriented system.
Insurance industry FOR PROFIT means -- they take your money BUT it is not pooled for your benefit, they will use it to hire people to deny your claims and keep you from getting money from the coverage for which you paid. This will increase their profit and pay their investors!
Education -- continued expenditures for publicly funded private schools - (charter schools) thousands of programs and software options over actual education expenditures.My school alone spends more than $12,000 a year on I-ready a software subscription which steals good education time and uses games to try to "improve" student performance on the test.  Thousands of tech companies eager to sell districts the latest and greatest gadgets (we have vendor fairs all the time so we can be exposed to the latest sales pitch)  Estimates of companies being able to garner billions in educational funds while my library languishes without proper space, furniture or computers for research is obscene!  Teachers should be replaced with programs which students can use to educate themselves -- gone is the common ground of what we as American's believe.....If you want to teach that the dinosaurs were put in the fossil record by Satan to confuse Christians --- you can do that in your private school -- but I resent my tax dollars going to that "education!"

Let's also think about some other areas where we traditionally share costs for mutual benefits -- Transportation - Museums---Parks and other public places are all headed for privatization with one goal in mind --  to make money --- We can stand by and watch the Disney-fication of our culture or we can elect people who are thinkers and who ferret out the truth rather than accept what the think tanks (propaganda mills) tell them!

If you want to understand how we got here and who has been driving the bus since the 1970's  read the article, It is long (25 pages) -- but some things cannot be said in 140 characters!
Posted by LibraryTeacher at 3:16 PM No comments: